World History Curriculum for All Ages

The Mystery of History is a chronological, Christian, complete world history
curriculum. Easy-to-use, historically accurate, and Christ-centered—
the award-winning series features four volumes of world history for all ages.

By popular demand, The Mystery of History Volume II is now available in its Second Edition! With the upgrade, you get a durable hardback, 400+ color images, and a digital download code for a newly revised Companion Guide (chockfull of enriching activities for all ages!)

If you’re looking for accurate, interesting, Biblical worldview history—look no further! The Mystery of History has what you need to learn history, teach history, and pass it on to the next generation! (You know world history is important—don’t delay and get started today!) 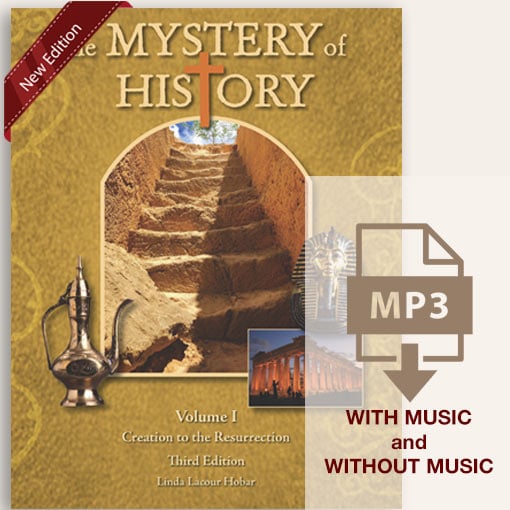 If you own the color hardback of The Mystery of History Volume I (Third Edition), this is the word for word audio file of Quarters 1-3 that matches! (Quarter 4 will be released in the Fall.) With or without music, these downloadable MP3 files are file will help you travel to ancient times through the voice of the author, Linda Lacour Hobar.

What is The Mystery of History?

(Scroll down for a warm welcome from the author.)

A Two-Minute Personal Intro From the Author

The Mystery of History curriculum follows history in the order that it happened all over the world.


The Mystery of History curriculum is written from a Christian world view and uniquely weaves world cultures and stories of the past alongside the events of the Bible.


Who are we at The Mystery of History, Inc.?

A small team—
with a big heart.

What’s in our store?

Everything you need to teach World History—

with confidence and conviction!

(Shop by time period below.)

This volume covers world history from Creation to the death and resurrection of Jesus Christ.  The text spans the incredible stories of ancient times, ancient lands, and ancient peoples.

>> Learn About Volume I
>> Purchase Now

Volume II expands on the fall of the Roman Empire and the Dark Ages that followed.  Delve into the chivalry of knights and damsels, kings and queens, and the peasants who faithfully served them.  Students visit Vikings and villains; castles and crusades; and the poetry of Dante and Chaucer.

Volume III will look at what was going on all over the world in the order that it happened. While the Renaissance and Reformation were taking shape in Europe, students will look at the rise of wealthy empires in West Africa; the Mogul dynasty of India; and the peaceful lives of the Aboriginals of Australia.  We will also visit Ivan the Terrible in Russia and the Tokugawa family in Japan.

Volume IV, the last and final volume of this world history series, spans three pressure-filled centuries from 1708 to 2014. Starting with Bach and Handel, two of four major composers included in Volume IV, the time period will see numerous “wars of independence.” From the American colonies, the heart of Mexico, the gold mines of Australia, the mountaintops of South America, the shores of Greece, and the walls of the Alamo, we will find mankind desperately striving for liberty and freedom through the eighteenth and nineteenth centuries.

What does a 'Week at a Glance' look like?

Easy, factual, and fun—
anyone can use The Mystery of History.

How do you 'Teach All Ages'?

The Mystery of History works for YOUNGER, MIDDLE, and OLDER Students

—all at the same time or through a repeating cycle.

What are others saying about The Mystery of History?

by peeking at our awards, reviews, and fan mail!

Find out
When I was looking for a World History program I wanted something that was Bible-centered, multi-level, with hands-on activity AND would cover what was going on in History in other parts of the world through a ‘Bible time-line’.  WHAT A JOY when I found The Mystery of History.  It was an answer to prayer. . . when we actually started using it just about DAILY my son would say,’Thank you so much for buying The Mystery of History, Mom, I Love doing The Mystery of History’.”
Jennifer Evalle

You have thought through this text, provided multilevel activities, and, I feel, you have poured yourself into each lesson. Thank you for bearing witness to His story.
Susan Coleman

I appreciate the worshipful attitude that Linda displays in her telling of history…Her excitement for His works is contagious…. my daughter, who is admittedly an advanced reader, was known to read The Mystery of History for leisure when she was only 4 years old.
Vicki Boshka

How can you reach us?

Let us count the ways!

The Mystery of History Guidance Counselors  are made up of experienced homeschool teachers.  They are also full-time mothers who volunteer their time to answer any questions or concerns that you might have.

The Mystery of History, Inc. is a small personal company dedicated to shipping books all over the world at the best rates possible.  Let us serve you!

Want to join us on social media?

The Mystery of History Volume I, Third Edition

1) Will the Second Edition still work for “all ages?

Yes! Students as young as 1st grade can enjoy the stories of medieval times even more—with the addition of 400+ color images and maps in the text and updated hands-on activities (with photos). Middle students can glean even more from the Companion Guide—with enhanced activities, new photos, and improved mapping exercises. Older students can continue to adapt the program to meet a high school credit through stimulating activities and literature suggestions on a high school level.

2) Will the First Edition Audiobook match the Second Edition text?

No. With the opportunity to rewrite text, the author made vast changes in the Second Edition by providing additional detail, richer vocabulary, and more pronunciations. However, the author did NOT rewrite entire lessons or change the chronological order of them. So, while listening to the First Edition may be convenient in a pinch or on a road trip, a student would not want to be reading from the Second Edition at the same time. The author will record a word for word revision of the audiobook in the future, but that is a 1-2 year project!

3) If I sell the hardback down the road, will the download code be reusable?

No. The download code falls under a one-time family license through the publisher, Bright Ideas Press. However, in the near future, you can purchase a digital Companion Guide (downloadable PDF) —allowing a secondary book owner to have access to the popular curriculum components.

4) I'm looking for an e-book of The Mystery of History, Volume II. Do you have one?

5) I would prefer a paper version of the Companion Guide. Will there be one?

Yes! It will be made available as a separate purchase as soon as possible.