In honor of Black History Month, Linda Lacour Hobar shares about the lives of three extraordinary Americans who fought for… 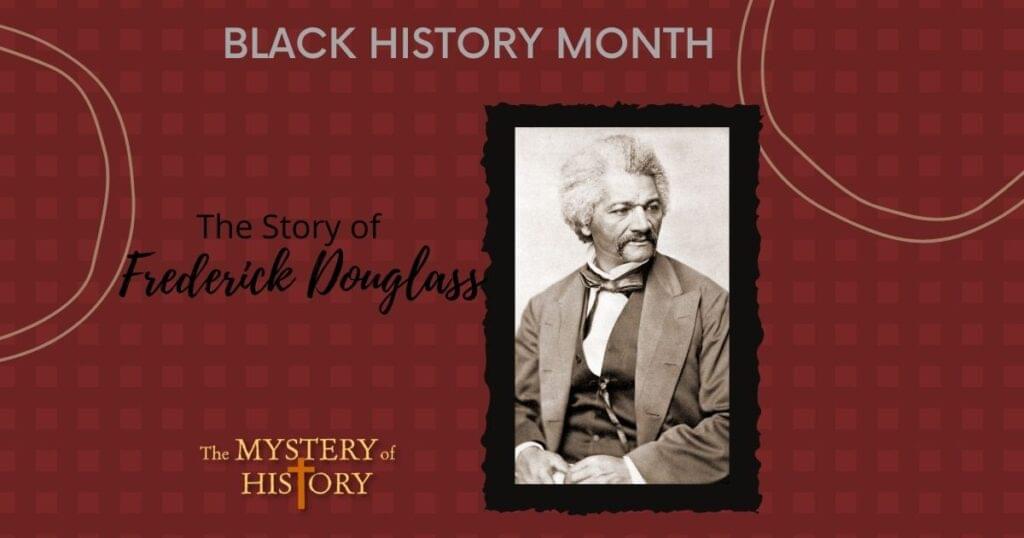 In honor of Black History Month, Linda Lacour Hobar shares about the lives of three extraordinary Americans who fought for freedom.  Today she shares the amazing story of Frederick Douglass. 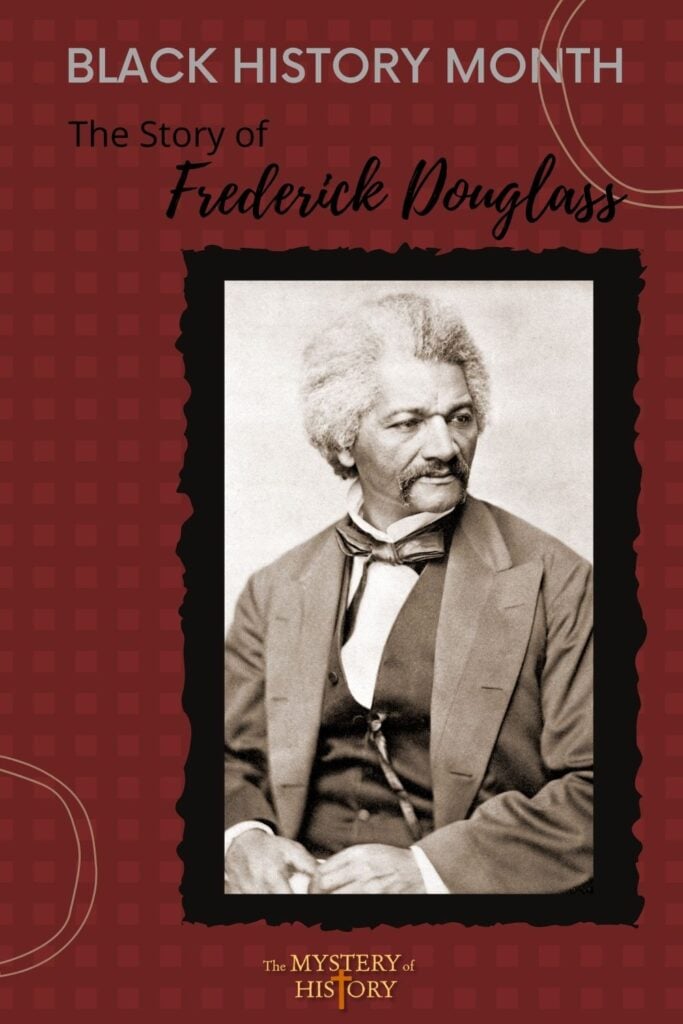 Like Sojourner Truth and Harriet Tubman, Frederick Douglass was born an enslaved person. Though his father was a white man, Frederick wasn’t recognized as having any rights. His mother was an African American slave, and so he was deemed at birth the “property” of his mother’s owner —  sold at the whim of others.

Frederick was born in 1818 in Maryland. Frederick would say that in his early childhood, he suffered less than other slave boys did when it came to getting whipped. His greater complaint was the cold and hunger he was forced to endure because his selfish masters kept him underfed and half-naked, even in the winter. Without a blanket, little Frederick slept with a cornmeal bag for a cover on the cold floor of a pantry.

Conditions improved for him when at the age of 8 he was sold to a tender-hearted woman in Baltimore. It was the kind woman in Baltimore who taught Frederick how to read. This woman, who was nice enough to tend Frederick’s wounds and feed him well, came to love Frederick like a son. Sadly, her maternal affections grew cold when her husband scolded her for teaching Frederick to read and forbade her to continue. In time, this woman came to believe she was doing Frederick more harm than good in giving him an education, and so she tried to pretend she had never unlocked his intelligence. But she had, and the genius in Frederick grew mightily. In secret, Frederick learned to write from friendly children in his neighbor-hood who paid no attention to his skin of mixed white and black ancestry. He exchanged bread and biscuits for their spelling books.

According to Frederick, his newfound intelligence was at times a blessing and a curse. In learning to read items like the Bible, lectures, and abolitionist papers, young Frederick felt blessed. The curse of learning came only from the fact that knowledge and reading alone couldn’t set him free. Educated or not, Frederick was still in bondage — he was still a “slave for life.” Looking back, Frederick would later write: “The more I read, the more I was led to abhor and detest slavery, and my enslavers.. . . Knowledge had come; light had penetrated the moral dungeon where I dwelt.”

Frederick would suffer under the yoke of slavery for many years to come. He found some relief at 13 when he came to know Jesus Christ personally and was saved from his own wretchedness. With a burst of hope for a better life, Frederick wrote: “I loved all mankind — slaveholders not excepted; though I abhorred slavery more than ever. My great concern was, now, to have the world converted.” But religion would be greatly tainted for Frederick when he was later sold to a cruel man who professed to be a Christian. Frederick was whipped almost daily by this professing Christian, who sang hymns at night and beat his slaves by day. This man had no regard for his slaves except to suppress them with humiliation and steal their dignity with floggings.

Frederick’s aspirations were buried. His only thoughts were those of survival. For months on end, his existence was foggy and loathsome. The tide would turn in Frederick’s favor when several times he was traded from one relative to another in the same slaveholding family. Oddly enough, it was under the “nice” masters that Frederick most burned with the desire for freedom. You see, when the beatings sub-sided and Frederick was taught a skill, he began to realize his worth. In seeing his value in society, he yearned more and more for equal footing to make his own wages. And so, it was when Frederick was in his “happiest” slave conditions that he planned his escape. His first attempt failed when he was betrayed by another slave. Two years later, he planned a second escape, which proved successful!

Frederick Douglass would never reveal the details of his final escape because he feared it would endanger those who had helped him and those who might follow in his footsteps. What he would say is this: It was not his own life that he hated and ran from, it was the institution of slavery. Slavery is what he identified as the demon that caused his suffering. He believed it the most unnatural arrangement between owner and slave, and it was evil.

Do you wonder what Frederick Douglass felt when first tasting freedom? Fortunately, he wrote it down for us. He said: “The dreams of my childhood and the purposes of my manhood were now fulfilled. A free state around me, and a free earth under my feet! What a moment was this to me! A whole year was pressed into a single day. . . . I felt as one might be supposed to feel, on escaping from a den of hungry lions. But, in a moment like that, sensations are too intense and too rapid for words. Anguish and grief, like darkness and rain, may be described, but joy and gladness, like the rainbow of promise, defy alike the pen and pencil.”

When starting life afresh in the town of New Bedford, Massachusetts, Frederick secured a job, got married, and started a family. Within just three years of escaping slavery, he met William Lloyd Garrison, the outspoken abolitionist, and publisher of The Liberator. Garrison grew fond of Frederick very quickly and invited him to travel and speak at anti-slavery rallies. By sharing his personal story of bondage, Frederick made a strong impression on his audiences. He was introduced to crowds as a “graduate from the peculiar institution” who carried the diploma of suffering through the scars on his back. 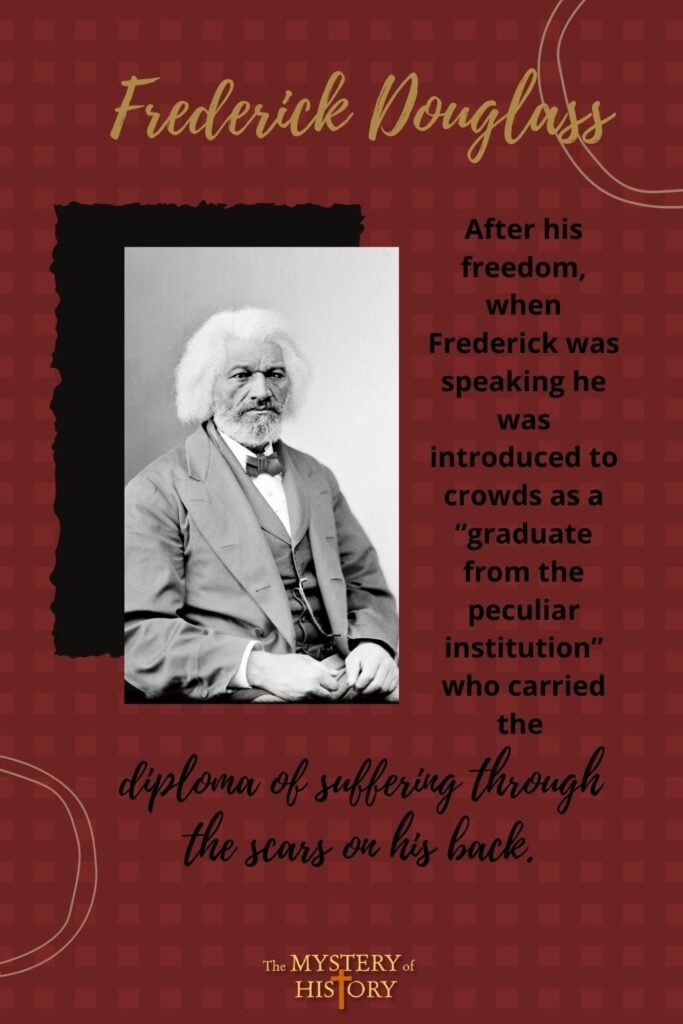 It was all too true that Frederick had suffered, but believe it or not, he was so eloquent a speaker that some accused him of being a fraud! Crowds demanded that Frederick give more details about his enslavers to prove his story. This was fine with Frederick, but by revealing his true identity and background, he was forced to flee to Great Britain. You see, if he stayed in the United States, there was always fear that his former slaveholders would hunt him down. Frederick traveled around England and Ireland, where he continued to wow audiences with his fine speaking abilities. Friends in Great Britain who loved him raised enough money to officially “buy” his freedom in the United States so that Frederick might return home a crusader, free of the fear of being captured.

Frederick Douglass carved out an amazing career back in the United States. Escaping the shackles of slavery, Frederick Douglass became an eloquent speaker and writer for social reform. In addition, he succeeded as a businessman, a statesman, and the president of a bank. He started his own newspaper, ran slaves through the Underground Railroad, spoke at rallies for women’s rights, wrote his autobiography, recruited soldiers in the Civil War, gave counsel to Abraham Lincoln, and held several government positions. (That’s a lot for any man to achieve!)

In humility, Frederick Douglass would say that “greatness” was forced upon him. According to Douglass, had it not been for the abolitionists in the United States and Great Britain, he might not have risen to fame and his story might not have been told. I think Frederick Douglass, if he were alive today, would be greatly encouraged to know that his story is still being told and speaks powerfully to new generations of Americans.

My story has grown long, because personally, I’m quite caught up in it! I hope that one day you will read for yourself the story of Frederick Douglass in his autobiography, Narrative of the Life of Frederick Douglass, an American Slave, published in 1845. He wrote two books after that, which further detail his story of faith, courage, and accomplishment. 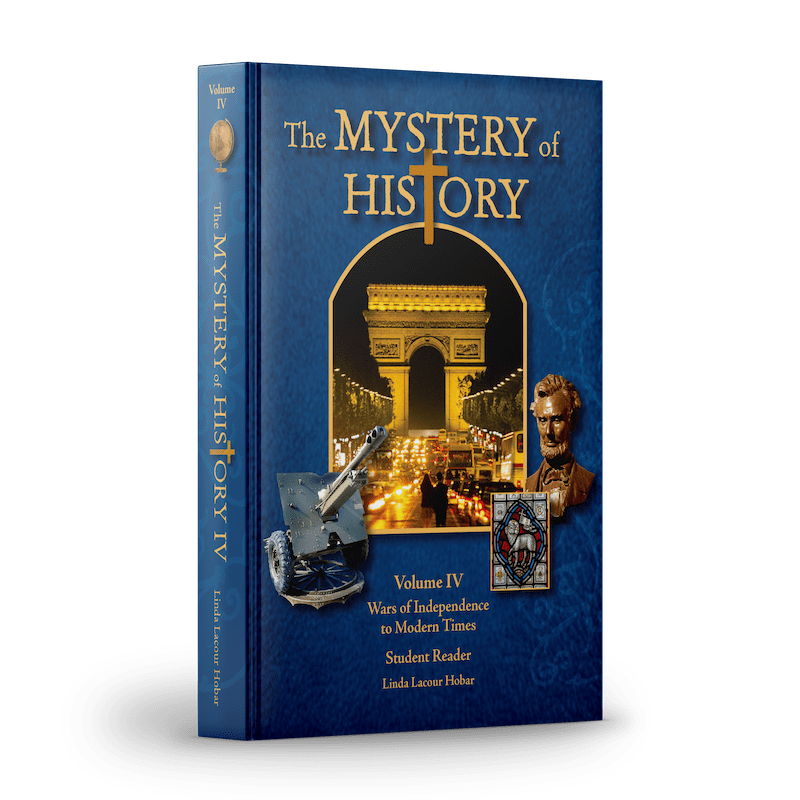