William Wilberforce- The Fight Against Slavery

I love coming across true heroes in history. I believe I’ve found one in the story of William Wilberforce. He was an Englishman who dedicated his career, and his final years in retirement, to abolishing slavery in the British Empire.  Let’s learn more about him! 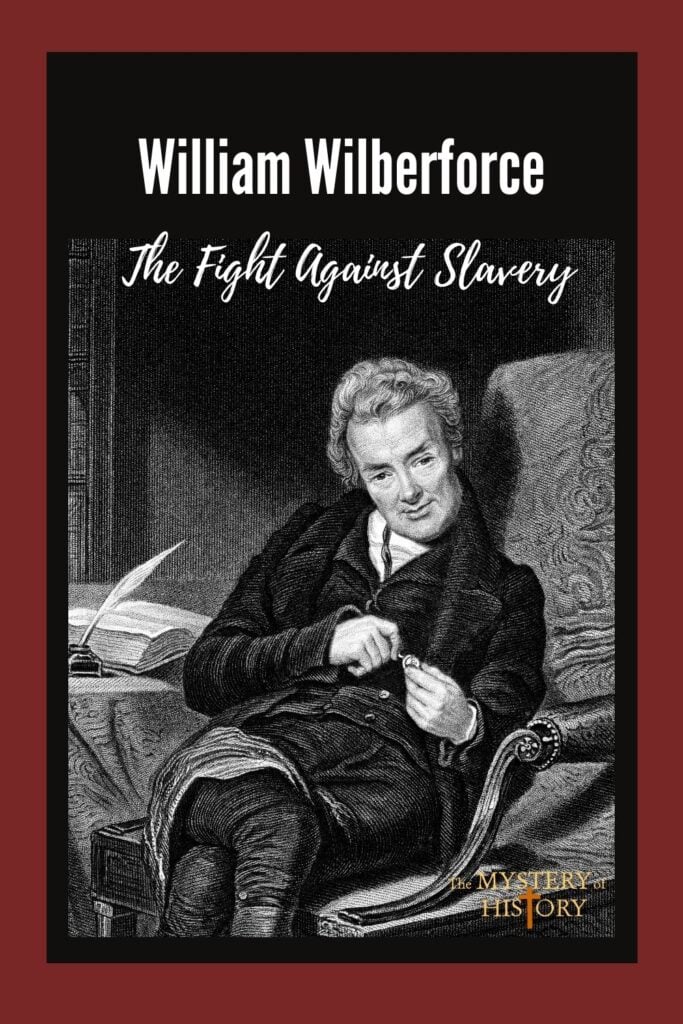 William was born of a wealthy family in Hull, England, in 1759. Hull was a port city, which means that young William saw with his own eyes the cruel institution of the trans-Atlantic slave trade. He knew the stench of the ships in port that traveled a three-legged journey carrying manufactured goods from England to Africa, slaves from Africa to the Americas, and raw goods back to England. When he was only 14 years old, William wrote a letter to the newspaper to complain about the atrocities of the Atlantic slave trade.

In his youth, William didn’t care much for religion. But he began to consider it after the winter of 1784 when he went on a long journey with a friend named Isaac Milner. Milner, a strong Christian, led William to study the Bible while they traveled together. William was attentive to his friend’s teachings, but not convinced of his need for Christ. That would change after William spent time with a minister in London known for speaking out against slavery, John Newton. Do you know who John Newton was? He was one of many who owned a slave ship and used it to traffic goods and slaves from one continent to the next. In coming to know Christ as his Savior, John Newton repented of his misdeeds and wrote one of the world’s most famous hymns, “Amazing Grace.” You probably know it. The words of that hymn are a powerful testimony of Newton’s life—dramatically changed by grace.

John Newton encouraged William Wilberforce not only to know Christ personally, but also to live for Him and fight against the slave trade in the British Empire. William took some time to ponder his calling. But on December 7, 1785, he committed his life to Christ and submitted his career to God’s will. Once he yielded to the idea of fighting the slave trade, William Wilberforce (who was hardly more than five feet tall and less than a 100 pounds) was unstoppable, unwavering, and nearly unbearable to be around. His mission consumed him. William’s inroad of influence on the matter of the slave trade was his position in the British Parliament.

You see, starting in 1780, he held a seat in Parliament until 1825 (that’s 45 years!). Known for his eloquence, William was approached by a group of abolitionists and Quakers to draft several bills in Parliament to change the British laws that allowed for slavery. William obliged wholeheartedly, but unfortunately, the first several bills went nowhere. In 1789, he gave a strong speech to the House of Commons. In it, he said:

“Never, never, will we desist till we have wiped away this scandal from the Christian
name, released ourselves from the load of guilt, and extinguished every trace of this bloody traffic.”

Coincidentally, William was great friends with William Pitt the Younger, who became the prime minister of England. Pitt supported his friend in the fight against slavery, but the personal connection didn’t help Wilberforce as much as he hoped. The opposition in favor of keeping slavery alive was stronger than expected. Proposed bills and flowing speeches were not enough to break up the moneymaking industry of slavery. 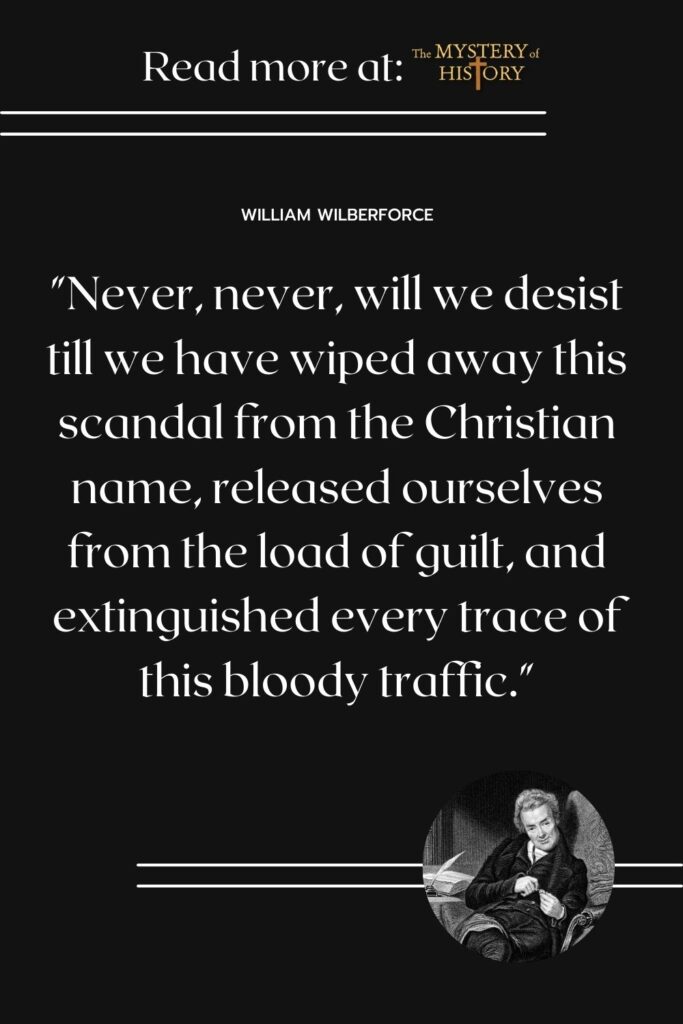 Fortunately, William Wilberforce was not alone in his convictions. He had a group of highly influential Christian friends who gathered together regularly for prayer and fellowship. This group of men, nicknamed the Clapham Sect for the town where they met, was one of the most unique brotherhoods in English history. These men examined the ills of English society and banded together to right the wrongs of mankind. They started charities, missions, programs, and Bible societies to care for the poor and imprisoned. But always on top of their list was the hope of abolishing the slave trade where it still existed in the British Empire.

So, year after year, William Wilberforce fought. His friends in the Clapham Sect helped him along the way and fueled his inspiration. They realized that the key to their success would be to change public opinion toward slavery. To make known the horrors of the slave trade, they carried out a mass campaign of literature distribution and created graphic billboards. Petitions were gathered, tours of slave ships were arranged, and the public gradually became aware of what was really happening to the African people captured across the sea.

After 20 years of relentless work, the final break for Wilberforce came in the winter of 1807 when his team sneaked a bill into session that focused on stopping British ships from providing French colonies with slaves. (As usual, the British and the French were not getting along at this time, and so the British didn’t want to help the French in any way.) Indirectly, the bill put restrictions on all slave ships and this brought the slave trade to a screaming halt in the British Empire! The Parliament quickly realized it had been duped, but it nevertheless voted to pass the bill, titled “Abolition of the Slave Trade Act.” This happened on February 23, 1807. In a room filled with strong emotion, William Wilberforce, sitting at his place in Parliament, bent forward with his head in his hands and cried.

William’s success motivated him to tackle other issues that plagued England. Before he died, this small-framed man with a big heart served in more than 60 societies dedicated to improving the morals and manners of the English. But in the forefront of all this, William Wilberforce was concerned for those who were still trapped in slavery. You see, he had successfully passed a bill in Parliament that stopped ships from trading slaves from Africa, but that bill did nothing to protect the people who were already caught up in slavery in England and the British West Indies.

So William Wilberforce continued to fight injustice! With fellow abolitionists, he founded the African Institution to try to heal the wounds inflicted on Africans. He created settlements for slaves who were set free. And he tried to sway other nations into abolishing slavery in their countries. Radicals in the Parliament gave Wilberforce little credit for his efforts. They believed the emancipation of slaves would ruin the job market for poor workers at home. It was a war between ethics and greed.

In 1825, William Wilberforce retired from Parliament to spend more time with his wife of 28 years and their six children (whom he loved dearly). Do you think retirement stopped him from campaigning against slavery? The answer is, no. It didn’t. William recruited a younger member of Parliament to keep up his work.

Now, here’s the best part of the story:

On July 26, 1833, just a few days before William Wilberforce died, he was told that Parliament passed the Emancipation Act—freeing all the slaves of the British Empire! William, on his deathbed, knew his fight had not been in vain. He died with the peace of having accomplished his life’s mission. What a beautiful ending to a life dedicated to others.

For a further activity you might check out the movie Amazing Grace.