What is it about the Mona Lisa?

What is it about the Mona Lisa? Is it her timid smile, her mysterious eyes, or just the pleasant look…

What is it about the Mona Lisa? Is it her timid smile, her mysterious eyes, or just the pleasant look on her face? For centuries, art lovers have asked themselves these questions about the most famous painting in the world. I don’t think I can explain it without first telling you a little about the genius who painted her. He was Leonardo da Vinci (properly pronounced LAY oh NAR do). 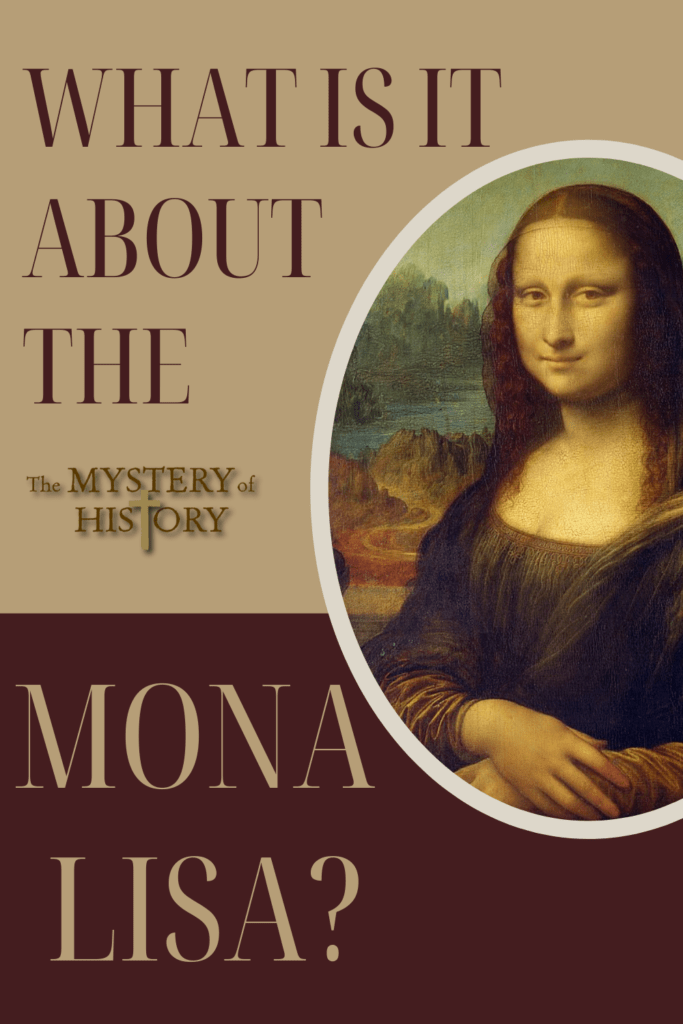 What is it about the Mona Lisa?

Leonardo was born on April 15, 1452, in a small village near Vinci, Italy. His early years were unstable. For awhile he lived with his grandparents and spent time with an uncle who cared a great deal for him. Despite the ups and downs of moving around, Leonardo was charming and attractive in every way, according to what those who knew him have written. A friend of his named Vasari wrote, “The radiance of his countenance, which was splendidly beautiful, brought cheerfulness to the heart of the most melancholy.”

Leonardo was also a genius. In school he excelled in math and music. With intense curiosity, he was always drawing something with great detail. Supposedly when he was just a boy, Leonardo brought dead lizards, toads, and snakes into his house as models for sketching. He was so absorbed in the details of his drawings that he never noticed the rotten smell of his subjects as they decayed!

Leonardo’s father eventually moved him to Florence to expose him to much better opportunities. Lorenzo de’ Medici — just three years older than Leonardo — was in power and opportunity was everywhere. When Leonardo was about 15, his father arranged for him to become an apprentice in the shop of Andrea del Verrocchio (Vair RAWK kyoh). Andrea was a master goldsmith, painter, and sculptor. As in medieval times, an apprentice was someone who learned a trade under a master. Rather than being paid, an apprentice was given food and lodging for learning a trade. This arrangement between Leonardo and Verrocchio must have been a good one because it lasted 13 years.

While in Florence, Leonardo painted something peculiar that began to reflect the mind of this genius. Leonardo began a scene titled The Adoration of the Magi (MAY jie). In it, the artist experimented with breaking the rules of perspective. “Perspective” in art is the science of making objects appear their real size. A good example of this is drawing things smaller when they are far away because that is how our eyes see them. Well, Leonardo enjoyed playing mind games with perspective. In The Adoration of the Magi, he drew stairs that lead to nowhere, horses larger than life, and the mother of Jesus as if she were suspended in time and space. In awe of her son, she appears unaware of all kinds of chaos around her. 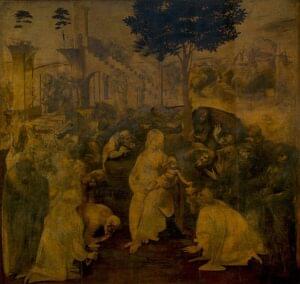 Unfortunately though, Leonardo never finished The Adoration of the Magi. This too became one of his distinguishing traits! It took him years and sometimes decades to finish his projects, if he finished them at all. In most cases, Leonardo was either too much of a perfectionist to consider his works “done,” or he was too easily distracted by all the things on his brilliant mind to finish what he started.

Nonetheless, it was in Florence in 1503, that Leonardo began his most famous work, the painting of Mona Lisa. There is so much to say about this work of art and art historians would praise the Mona Lisa for several attributes.

Was Mona Lisa a Real Person?

In case you were wondering, most historians think that Mona Lisa was a real person. Most likely she was Madonna Elisabetta, the second or third wife of Francesco del Giocondo (Joe KAHN doe). In Italian, the portrait is called La Gioconda (La Joe KAHN da) — after the feminine version of Elisabetta’s married name. Francesco asked Leonardo to paint the picture of Elisabetta, or Lisa. The request came perhaps after the couple had lost a child.

The odd thing about the portrait is that Leonardo kept it in his possession for years. Every once in a while he would add a layer of paint here and a layer of paint there to give it more depth or less depth — or whatever Leonardo desired. Over the course of three years, the artist called Lisa back and forth to pose in his studio. Legend says Leonardo hired clowns and jesters to keep Lisa smiling. It may be that she was still grieving the loss of her baby and needed a little help in making that famous smile.

After that, it’s believed that Leonardo carried the painting with him and slept with it by his side. Perhaps the genius in him was pleased and knew he had created a masterpiece. Perhaps he felt he had captured the broken heart of a mother in mourning. The story is not fully known. But, many, many years later, the Mona Lisa made it into the hands of Napoleon, who hung it in his own bedroom! Fortunately for us, it was retrieved and now hangs in the Louvre (LEWV) — a very large and beautiful museum in Paris. The painting is heavily guarded behind bulletproof glass where millions can admire it. (I saw it once myself. To my surprise, it’s not very large.) I hope you will see it yourself one day!