If you grew up in a traditional classroom of the 60s, 70s, or 80s, as I did, you probably developed… 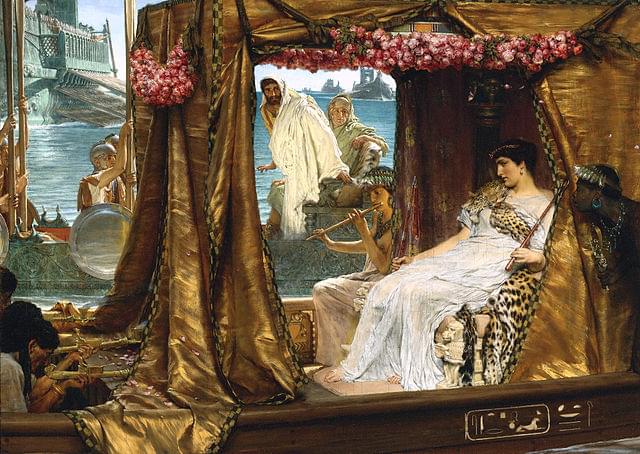 If you grew up in a traditional classroom of the 60s, 70s, or 80s, as I did, you probably developed a “meh” attitude toward world history that started around junior high. And if you are honest, you’re terrified of passing on this grim view of history to your children! Well, I’ve got good news. There is hope and help for “unleashing world history” for you and your children! To get there, we first need to examine what may have “leashed” you down and held you back from this subject, to begin with. I have four possibilities. 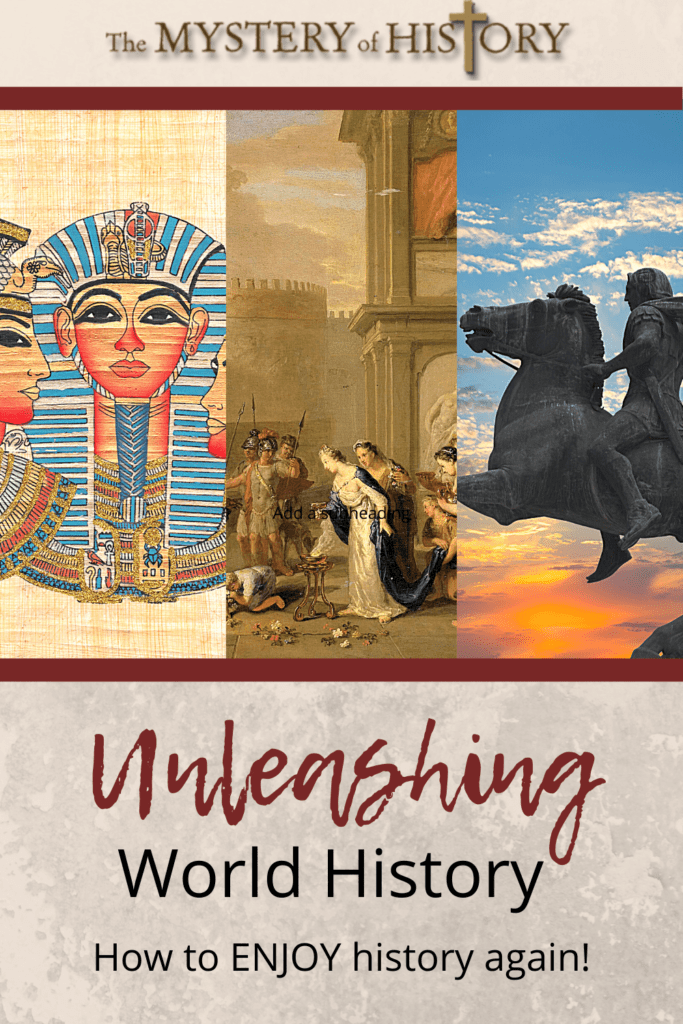 First, I think the most common complaint against world history is a memory of it being boring. Why? Because it was! Truly, most of our history lessons came packaged in dull, dry textbooks that emphasized dates, events, and treaties to cover the entire history of the world. Written by committees­––shackled by political correctness––these textbooks weren’t “living books.” They were ­dead­­­­––and they put us to sleep.

Second, I have heard rumblings from history-haters that the subject was irrelevant to them in adolescence. Their protests would sound something like this: “Who cares what happened thousands of years ago!” Or worse, “History is just about dead people!” I hate those rants now, but like most kids, I’ve thought them before.

Third, I have heard some parents say, in all sincerity, that they think world history is just too morbid for their sweet children. These folks want to protect their children from the gruesome stories and images they remember from their history books. 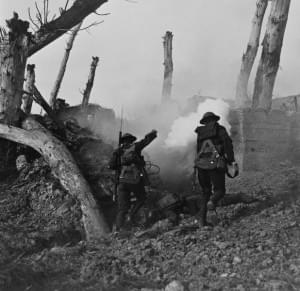 Well, being that I first learned about the Holocaust through black and white pictures of emaciated corpses, I can be sympathetic to this objection! But stay with me. I’ll get to a positive spin on this point.

Fourth, and last, there are those of us who were only taught world history as a secular subject to fulfill a high school credit. As a matter of fact, if you attended a public school, then you were taught history only through the eyes of man alone, and it was required to graduate. Those are two ingredients sure to spoil any good subject!

To summarize, four leashes that may restrain parents from teaching or enjoying world history are memories of boring, irrelevant, morbid, or secular material. Worsening the situation, some of us experienced all these factors together––and are chained by the fear of repeating history! (All pun intended.) Well, I propose to you my friends that with proper emphasis, the study of world history doesn’t have to suffer under any of these restraints! Here are my four counterpoints and suggestions for unleashing world history in your home.

Keep it About the People!

To counteract boredom, dig into the personal lives of the people that lived it. In other words, keep it about the people! My favorite example is that of Cleopatra. If you look her up in a typical textbook, you’ll find one paragraph stating she was the last of the Ptolemy rulers in Egypt. I don’t know about you, but that fact is not enough to keep my eyes open! What will interest me is learning that Cleopatra rolled herself up in a carpet to be smuggled into a meeting with Julius Caesar, the most powerful man in Rome, so that she might secure the throne of Egypt. After the sudden assassination of Caesar on the windy Ides of March, Cleopatra married Marc Antony, another powerful Roman, in hope of taking over the known world! And, after her lavish warships lost the Battle of Actium to Octavian (yet another powerful Roman), she took her life dressed up like Isis, an ancient Egyptian goddess. (That’s pretty juicy stuff! But there’s more.) Upon the death of Cleopatra, and that of Marc Antony, Octavian founded the Roman Empire, changed his name to Caesar Augustus, and ran a census “that all the world should be registered” (Luke 2:2) including Joseph and Mary who traveled to Bethlehem––and fulfilled prophecy in doing so! Most would agree that that kind of history, which is personal and significant, isn’t boring at all and may even lead you to fall in love with world history. (That’s what happened to me!)

Connect it to Today’s Headlines!

To ward off irrelevance, I suggest whenever possible to connect it to today’s headlines. It’s not that hard to do. For example, in The Mystery of History  Volume III, I wrote a story dating back to 1501 that describes how Persia became Iran and how a young king named Ismail decided that Iran would be a Shiite nation rather than Sunni. (FYI, Islam is sorely divided between Shiites and Sunnis, who differ in their theology.) Well, if you’ve watched the news lately then you know this theological decision from as far back as 1501 is very relevant to today since the Shiites of Iran are not interested in joining the growing caliphate of ISIS––which is predominantly Sunni! World history is always embedded in the news and brings an intrinsic value to today’s headlines.

Use it to Inspire the Heart!

As for being morbid, I must first agree that world history can be uniquely dismal. I would know because I’ve been researching and writing it for 15 years. But, properly handled, we should use it to inspire the heart. With some discretion, we should allow painful stories to provoke a natural response. For example, we ought to be shocked by the destruction of Pompeii at the eruption of Mount Vesuvius–– 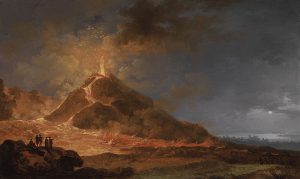 because natural disasters can take us out of this world in an instant! We ought to weep over the Trail of Tears––because it was unjust and still affects the lives of Native Americans! And, we ought to be horrified by the gulag system of the former U.S.S.R.––because it was utterly inhumane and should never, ever be repeated! Yes, as uncomfortable as it might be, the reality of evil, found in the pages of world history, can teach us valuable heart lessons about the brevity of life, the sinful nature of mankind, and our need for salvation.

Search for God’s Sovereignty and the Hope of the Gospel!

Speaking of salvation, my last counterpoint is this: if you only looked at the stories of history as a secular record of the past, you’ve missed half the story. You see, history is not just the record of man’s doings––it’s the story of God’s doings! World history is the culmination of God’s sovereignty in the affairs of mankind, as well as the story of the Lord drawing us in our sinful mess toward salvation, which is the gospel. So, at every opportunity, use the study of history to search for God’s sovereignty and the hope of the gospel. The truth is there, written and woven between every line and paragraph of world history. But please don’t take my word for it. Turn instead to God’s Word, which says:

He has made from one blood every nation of men to dwell on all the face of the earth, and has determined their preappointed times and the boundaries of their dwellings, so that they should seek the Lord, in the hope that they might grope for Him and find Him, though He is not far from each one of us. (Acts 17:26-27, NKJV)

In closing, as you are seeking the unleashing of world history in your home, remember to keep it about the people; connect it to today’s headlines; use it to inspire the heart, and search for God’s sovereignty and the hope of the gospel. If after all that you still find yourself a little “meh” about world history, then pray for enthusiasm; add some timeline pieces, hands-on activities, geography, and much more with The Mystery of History; and repeat these suggestions until conditions improve. For the sake of your students, and for the glory of God, work wholeheartedly toward “unleashing world history!” You won’t regret it.

For the Sake of the Mystery,