The Marriage of Pocahontas

The last we looked at Pocahontas, she supposedly saved the life of John Smith when she dramatically threw herself over him and begged that he be spared. You can read more about that in the post The History of the Jamestown Settlement. Well, there is still much debate as to whether or not that story is true. But what is true about Pocahontas is that when older, she was sold out, kidnapped, and married. She gave birth to a baby in the New World (“new” only to Europeans) then traveled to England to see the Old World for herself! I find it an intriguing story of love and adventure that brought two very different worlds together. Today, let’s look at more details that led to the marriage of Pocahontas. 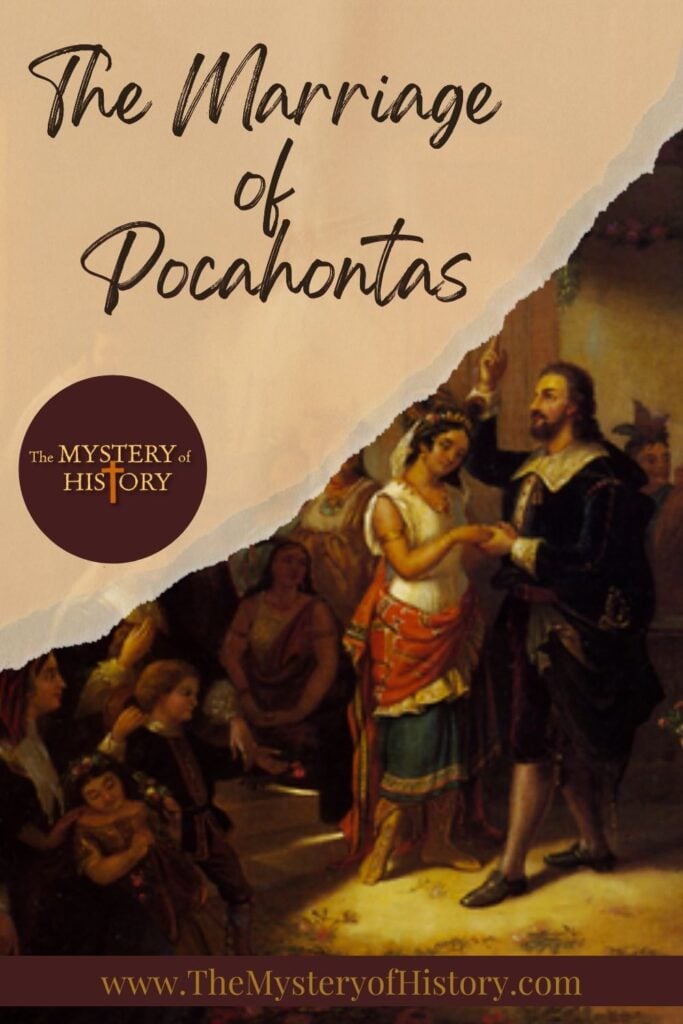 The Marriage of Pocahontas

As you learned before, Pocahontas was the daughter of Chief Powhatan. Because he was the “king” of many native tribes, most would consider Pocahontas a “princess.” But that title is questionable. We are not sure if she or her people would have given her this exalted title. You see, the birth name of Pocahontas was Matoaka (Mah TOE uh kuh). But the Native Americans nicknamed her “Pocahontas,” which means the “naughty one,” the “spoiled child,” or the “one who plays.” Her winsome nickname gives us the clue that she had a mischievous character and may not have been what others would consider proper princess material. For myself, I would very much like to have known this brave little Native American girl. (To stay with tradition, I’ll call her Pocahontas, too.)

Going back in time a bit, it was 1609 when John Smith was injured from a gunpowder explosion and sailed back to England. After he sailed, the settlers told Pocahontas that John Smith was dead. I don’t know why she was misled. But she was. Still, she continued to interact with the settlers of Jamestown. She carried messages to and from her tribe, traded furs and food for English tools, and practiced cartwheels with the boys just for fun. Some believe that somewhere along the way, she married a Native American warrior. But that is not the marriage of Pocahontas that we are especially interested in.

It was in 1613 that the life of Pocahontas would dramatically change. It seems that both Native Americans and Europeans would have a hand in her demise. A ship captain named Samuel Argall bribed a Native American couple with a shiny copper kettle if they would help him lure Pocahontas on board his ship. The couple agreed. I don’t know why they would sell out and betray one of their own, but they did. The captain’s intention was to capture Pocahontas and use her for ransom in negotiating with Chief Powhatan! The plan didn’t exactly work. Powhatan would not give the ship captain everything that he wanted in exchange for Pocahontas. That, too, is hard to believe. It may reflect that Powhatan had lost faith in his daughter after she first befriended the white man. It’s hard to say.

For a year, Pocahontas remained in captivity with the European settlers. She was moved from Jamestown to a secondary English settlement named Henricus. It is believed that she was treated well and taught English and the basics of the Christian faith by Alexander Whitaker, a theologian from England who had started two churches near the Jamestown colony. I don’t know exactly what Pocahontas thought of the story of Jesus Christ, which would have been new to her, but she professed to become a Christian and was baptized. She took the English name of Rebecca.

The Marriage of Pocahontas to John Rolfe

As if those changes weren’t drastic enough, Pocahontas went a step further. On April 5, 1614, she married a kind English widower named John Rolfe. Native Americans speculate that she only married to gain her freedom. We don’t know if she married for love or self-preservation. But in a letter that John Rolfe wrote, it would appear that he truly loved her. He wrote,

It is Pocahontas to whom my hearty and best thoughts are, and have been a long time so entangled, and enthralled in so intricate a labyrinth that I could not unwind myself thereout.

I find myself extremely curious about this marriage of Pocahontas in the New World. I wonder if Pocahontas wore flowers in her hair or carried them in a bouquet? I wonder if she followed the wedding traditions of her native people or of the Europeans or both? Apparently, many friends and family rejoiced over the marriage of this couple and attended the wedding — that is, except for Chief Powhatan. I suspect that he did not approve. But the marriage of Pocahontas helped create peace between the Native Americans and the European settlers — at least for some time. Even Chief Powhatan must have warmed up to the idea for he did allot the couple property for a cottage along the James River.

Just about a year later, Pocahontas and John Rolfe had a baby boy, whom they named Thomas. With parents of the Old World and the New, I wonder what he looked like and how his mother bundled him? Did she carry her son in warm animal skins like a Native American papoose or wrap him in soft woven blankets like an English newborn? I wonder if she whispered softly to him in her language or if she sang to him newly learned lullabies in English? We may never know these details.

Well, as time passed, John Rolfe decided to take his wife and child back “home” to England. The English were excited at the idea, as was Chief Powhatan. But there was probably political motivation on both sides. For the English, showing off Pocahontas in England would surely create excitement and support for settlers to the New World. For Chief Powhatan, it was a chance to send his warriors to scope out the homeland of their white “invaders” and learn what the white man was capable of. So, when the time came to sail, Pocahontas was joined by 12 of her own people. Uncertain of their future, they were brave to leave home. 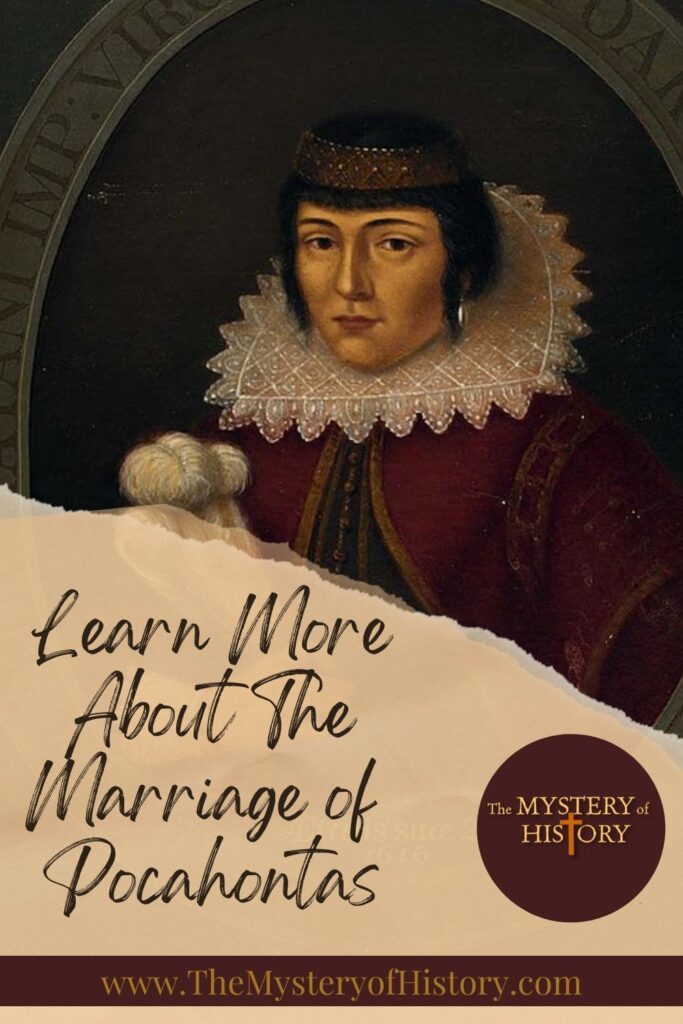 Once in England, Pocahontas fully adopted the ways of the English. She dressed in high style with long, frilly dresses and pulled up her hair with pins and curls. It must have felt peculiar to dress like European women and walk in high-heeled shoes! But she did. Imagine Pocahontas seeing castles and cathedrals for the first time, hearing harps and church bells, and smelling sugar-coated pastries and puddings. I hope she enjoyed the new sights and sounds and scents. The English adored her and treated her like royalty. Pocahontas was invited to balls, banquets, dances, and plays, including one written by William Shakespeare. I can hardly imagine what she thought of that.

I mentioned in a previous post that John Smith had not seen the last of Pocahontas. If you remember, he returned to England to heal from his wounds. It is said that the two saw one another at least twice in public. Apparently, their encounters were awkward. Maybe because Pocahontas had been told that John Smith was dead! Or maybe John Smith was concerned she might tell stories that were a little different from the ones he told about the New World. Many suspected that he fibbed a lot about his North American adventures to make himself more of a hero than he was.

Regardless of their strained encounters, John Smith wrote to the Queen of England to say that Pocahontas had been kind to him and once saved his life. It prompted the queen to invite Pocahontas to her court! At least, that’s how the story goes. We may never know exactly what transpired between Pocahontas and John Smith.

The saddest part of this story is that as Pocahontas and her husband and toddler prepared to travel back to North America, Pocahontas fell ill — deathly ill. At only 21 or 22, she suffered from a bad case of either pneumonia, tuberculosis, or smallpox. She never boarded the final ship that sailed back to the New World. She never crossed the sea to embrace her own people again. Pocahontas died in England and was buried there at St. George’s Church in Gravesend. Many grieved the loss of this special young woman who had shown so much courage in her lifetime.

As for John Rolfe and Thomas, they lived most of their lives in North America. Unfortunately, peace with the Powhatan nation did not continue. After Chief Powhatan died, fighting broke out between the settlers and the Native Americans. The Powhatan nation would not survive.

As an interesting side note, some have tried to trace the descendants of Pocahontas and John Rolfe to modern times. One descendant was Edith Wilson, the second wife of Woodrow Wilson (America’s 28th president). For a time, some believed that the family of President George W. Bush was related, but that theory has been disproved.

In closing, I want to discuss the way that Pocahontas has been portrayed in films and books. She is certainly a well-loved figure. But recent films and many children’s books are hardly accurate from a historical perspective. In a romantic way, Pocahontas is usually shown as a young woman when she rescues John Smith, rather than as the child she was (if it happened at all). Then, in fairy-tale style, the two supposedly fell in love! Well, when you come across this legend, try to remember the real story. Remember that Pocahontas, when just a little girl, really did show kindness to the European settlers of Jamestown by bringing them corn from time to time. But rather than living happily ever after, Pocahontas was kidnapped and used as a pawn between the English and her Native American people. Eventually, and tragically, she died in England at a young age, leaving behind her husband and baby son. Hers is a brave but tragic story of two very different worlds coming together and shaping history.