July 4th Facts and History PLUS Activities and Booklist!

Americans, young and old, love the 4th of July, otherwise known as Independence Day. Family vacations, watermelon, parades, and fireworks are all part of our fun traditions. But, we all know there were many sacrifices for our independence. This year, perhaps more than ever, we need to look back at the struggle to appreciate what freedom means. Enjoy these July 4th facts and history—and stay tuned for the activities and a printable booklist at the end. 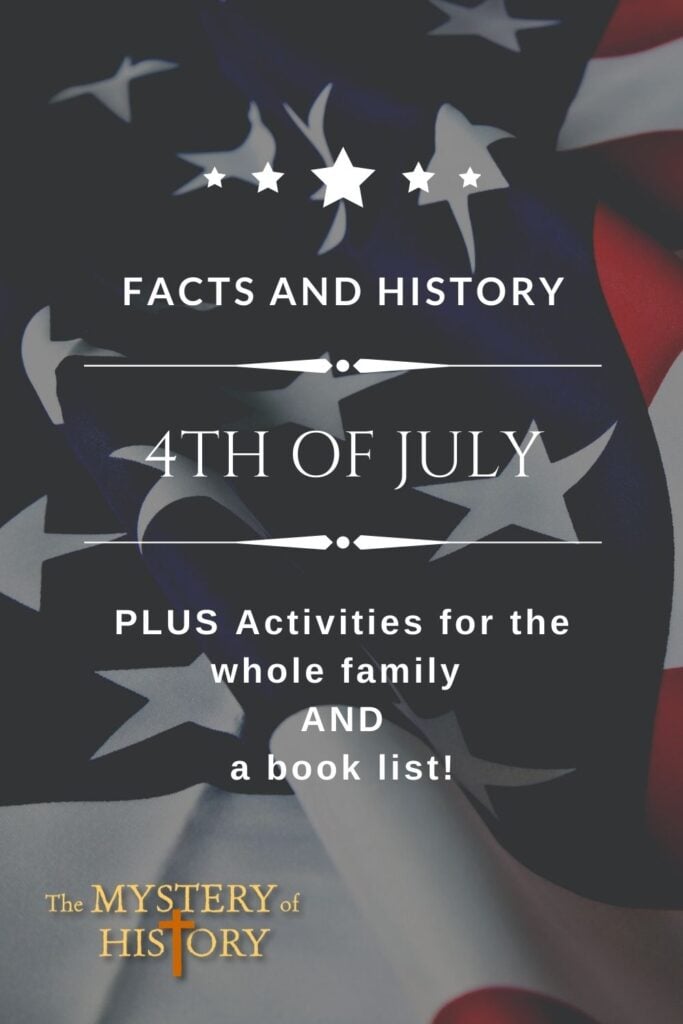 4th of July Facts and History

After Washington and his army took Boston from the British, the Second Continental Congress nominated five men to write a formal declaration of American independence from Great Britain. The five men were John Adams, Benjamin Franklin, Robert Livingston, Roger Sherman, and Thomas Jefferson. The five agreed that Jefferson was the best writer in the group and had the most experience with British Common Law. So Thomas Jefferson was given slightly more than two weeks to pen the most famous document of the future United States of America. He was only 33. It was Thomas Jefferson, red-headed, eloquent, and brilliant, who pulled together centuries of thought from the Magna Carta, Edward Coke (pronounced Cook), John Locke, and Sir William Blackstone. All had been saying much the same, which was that mankind has been granted “God-given rights,” and it was the government’s responsibility to honor them. If a government failed, it was the right of the people to overthrow it and start anew. After several revisions, Thomas Jefferson summed up the cries of the people for many ages with these famous words in the Declaration of Independence, drawn in ink and defended in blood:

We hold these truths to be self-evident, that all men are created equal, that they

are endowed by their Creator with certain unalienable Rights, that among these

are Life, Liberty and the pursuit of Happiness. — That to secure these rights,

Governments are instituted among Men, deriving their just powers from the

consent of the governed. — That whenever any Form of Government becomes

destructive of these ends, it is the Right of the People to alter or to abolish it, and to

Right in front of the colonists, an entirely new government was being shaped and formed. The Declaration of Independence was adopted by the Continental Congress on July 4, 1776, and signed about a month later. In jest, John Hancock signed his name in extra-large letters so the king wouldn’t need his glasses to read it!

Benjamin Franklin said at the signing, “We must, indeed, all hang together, or most assuredly we shall all hang separately.” 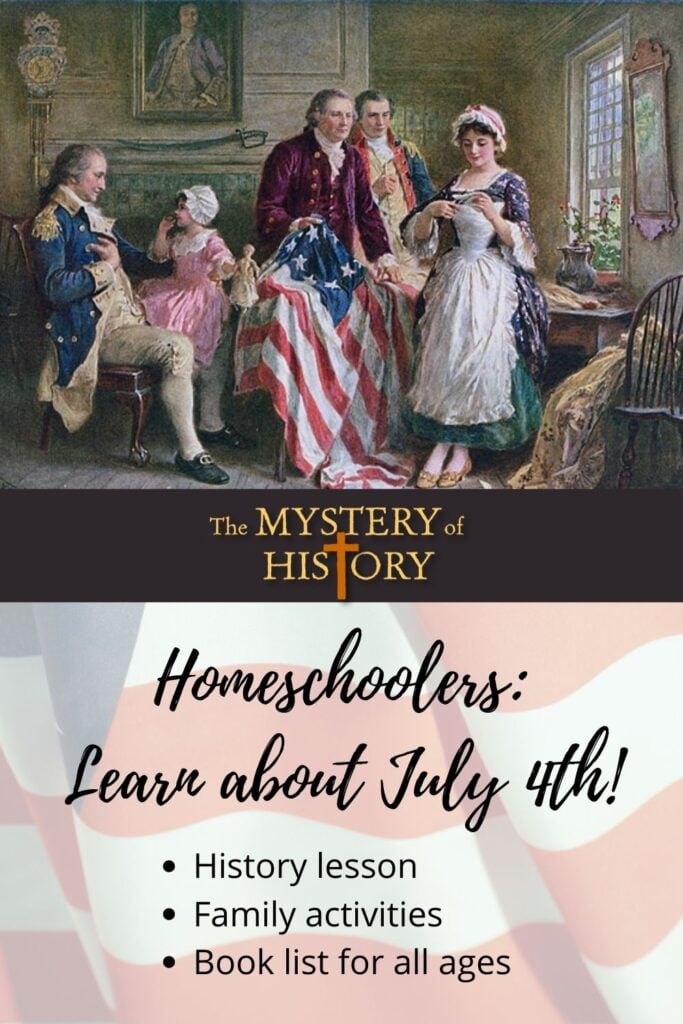 The signers of the Declaration of Independence knew that they were putting their lives on the line, but thankfully none of them ended up losing their lives to the British. They did however not have easy lives…

The signers of this document really were heroic because they knew that what they were doing could endanger them and possibly cost them their lives! They vowed to each other “our Lives, our Fortunes, and our sacred Honor.” But, none of the fifty-six died in the hands of the British as a direct result of signing! Every signer survived the American Revolution with most going on to serve the brand new United States of America.

Having said that, the signers did not have easy lives.  In fact, some of them were captured and tortured; others had their homes invaded and burned. Some of them had to go into hiding; and some that were very wealthy ended up in poverty. One signer many years later died of suspected poisoning!

So you can see that signing the Declaration of Independence was certainly not a light act and something that took bravery and dedication to the idea of freedom from Great Britain!

The Flag was actually made before July 4th.

About six months after Washington successfully crossed the Delaware, the Continental Congress passed the first Flag Act, to make the “stars and stripes” official. It was not the first time a flag had flown for an American militia. George Washington first hoisted a flag above his base near Boston on January 1, 1776. It had 13 red and white stripes and the British Union Jack in the upper-left corner. There were British emblems on it because that flag was made before the Declaration of Independence — before serious talk of breaking away from England.

Of course, that all changed after July 4, 1776. Tradition says that Betsy Ross, as early as May of 1776, was recruited in Philadelphia to sew the first flag of the United States of America. She supposedly snipped out a perfect five-point star with her scissors (which was easier to cut than a six-point star) to quiet the men’s concern that stars would be difficult to make. Whether this story is true or not, on June 14, 1777, Congress resolved in the Flag Act: “That the flag of the United States be made of thirteen stripes, alternate red and white; that the union be thirteen stars, white in a blue field, representing a new Constellation.” And so it was that the flag of the United States was born.

The Liberty Bell had a different name early on.

The Province Bell was the Liberty Bell’s name at first.  Written on the bell is the Bible verse: “Proclaim Liberty throughout all the land unto all the inhabitants thereof.” (Leviticus 25:10) On July 4th it echoed with ringing; bonfires were lit; colonists rejoiced in the streets, and the Sons of Liberty erected more “liberty poles” in the colonies to express their quest for freedom. (The idea of liberty poles was borrowed from the ancient Romans, who erected flagpoles to symbolize freedom from tyranny.)

I hope you enjoyed these July 4th facts and history. Here are a few fun family activities for all ages to enjoy! 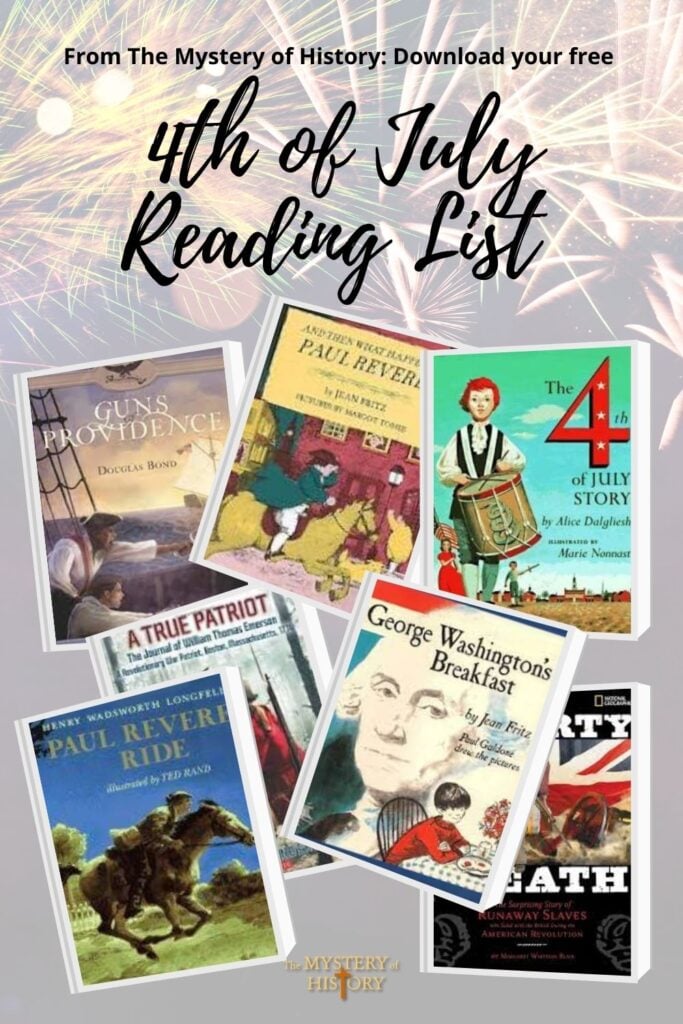 Enjoy this printable PDF with books for younger, middle, and older students to learn about all the events around Independence Day! 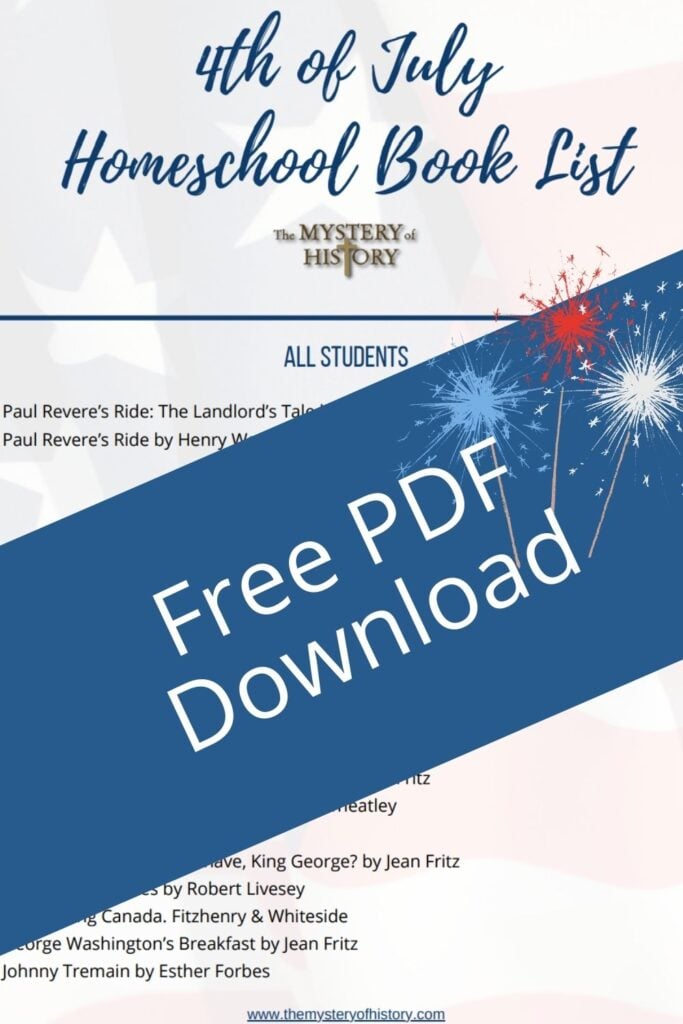 A good bit of July 4th Facts and History was taken from excerpts of The Mystery of History Volume IV. For more information and a free audio sample click here.