5 Facts About The U.S. Constitution

May 14, 1787 was an epic day in the history of the United States. For It was on this day that 55 men were scheduled to gather in Philadelphia to begin the process of creating a very important document. (Not yet understanding the significance of this event, they were delayed for lack of a quorum.) A few years after the Revolutionary War, the states of the Confederation were arguing because their previous laws and agreements were not working well. Finally, on May 25, 55 delegates gathered together in Philadelphia to solve these problems at what has been called the Constitutional Convention. Today I want to share 5 facts about the U.S Constitution and the history surrounding it. (For a family game about the Constitution, consider “Constitution Go Fish!” It’s on sale now.) 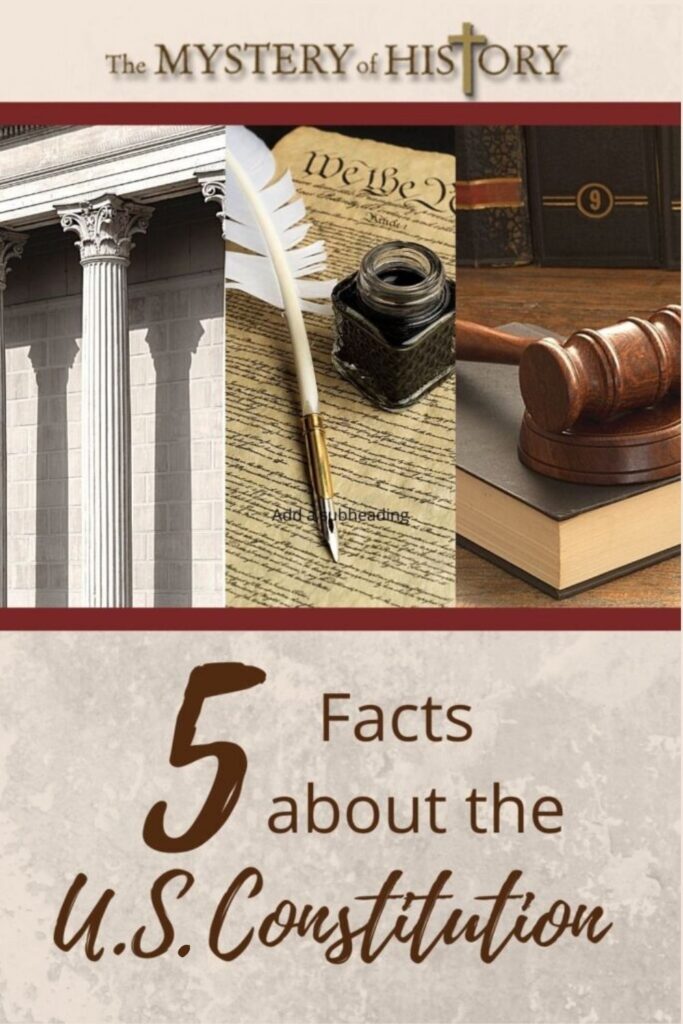 5 Facts About the U.S. Constitution

1.The Constitution of the United States was not the first document used to bring about order to our land. When Philadelphia was initially invaded by the British (during the American Revolution), the delegates of the Congress fled and regrouped in York, Pennsylvania. From York, vital documents were being written and rewritten. They were the Articles of Confederation, the first draft (so to speak) of a constitution for the United States of America. The Articles “legally” united the colonies into one union. The form of government, at least for the time being, was considered a confederation. Though originally drafted in 1777, the Articles of Confederation were not fully accepted by all 13 states until 1781, leaving the colonies, through most of the war, without a united government. Each state had its own governing body, and so, like the ancient city-states of Greece, they fought and argued! The Articles of Confederation were a true milestone in American history. They represent the first stab at creating a balance of power between the colonies (now called states) and the government as a whole unit. After much bickering, states at this point were given more individual power than the Confederation was given as a whole. The Confederation was given only limited authority. It was allowed to make war, negotiate treaties, and oversee western territories. The Confederation could not borrow money, loan money, or make currency. The minting of coins was left to each state. These issues may not seem significant now, but they were later. The flaws of the Articles of Confederation would lead the founding fathers to be more ingenious when writing the famous Constitution that would replace the Articles.

3. The Constitution began our current three-pronged federal government  Within only five days, the convention (urged by the Virginians) agreed to toss the idea of a confederation and replace it with a new three-pronged federal government. The new government would have a built-in balance of powers between a legislative branch (a congress to make laws), an executive branch (a president), and a judiciary branch (a supreme court to interpret the laws). Like a triangle with three equal sides, each branch would be equal in function. (The idea had originated with Montesquieu, a French political thinker of the Enlightenment.)

The next item of business for the convention would be the hardest. It took four months (and prayer, as suggested by Benjamin Franklin) for small states and large states to agree on how they could be fairly represented in the newly formed congress. Should each state get one vote or should each state get a number of votes based on its size? Neither seemed fair until finally a great compromise was reached. Two houses of congress would be created! One was based on size and the other one was not. Still today, the Congress of the United States operates like this: There is the Senate — where each state is equally represented by two senators. And there is the House of Representatives — where each state elects representatives based on the population of the state.

4. Not all 55 delegates made it to the signing. By the time all the delegates agreed on the new Constitution, only 39 were left to sign it. Those who signed it on September 17, 1787 are honored (among numerous others) with the title of “Founding Fathers of the United States.” They worked hard to earn that title. Each delegate had to go home and present the plan for ratification. That would take another year. In 1788, a majority of states agreed on the Constitution, which was essentially a contract, and it was made official on March 4, 1789.

5. The Constitution Was Amended in 1791.  As good as the new Constitution was, it was still not perfect as far as some were concerned. And so, by December 15, 1791, ten amendments were added to the Constitution. They are called the Bill of Rights because they specifically relate to the personal rights of Americans. The American people can thank James Madison (inspired by George Mason and others) for helping to construct the Bill of Rights. He foresaw the extreme importance of the First Amendment rights, which are the freedom of religion, the freedom of speech, the freedom of the press, the right to assemble, and the right to petition. Additionally, other personal rights are acknowledged in the remaining nine amendments.

You might ask, has the Constitution been a successful one? Well, as it was originally written, it fell short of protecting the rights of all Americans by grossly excluding the rights of slaves and women. With the shedding of much blood, these exclusions were corrected with the Thirteenth and Nineteenth Amendments. With the passing of dozens of other amendments, the Constitution of the United States does stand as the oldest constitution in working order—which speaks of its unparalleled success in world history.

The founding fathers of the United States replaced the idea of a confederation with a three-pronged federal government. The purpose of the three-pronged government was to balance the powers of the President, the Congress, and the Supreme Court. To appreciate the difficulty of keeping this delicate balance, try to balance three equally sized books at one time. Place one on your head and one in each palm. Practice walking on an imaginary timeline running through your home or classroom. Take turns with other students and your teacher, discussing the importance of balance.

Middle Students—”The Bill of Rights At Your FingerTips”

Print the instructions for this fun activity.

Go to the Printable.

Read Washington’s Farewell Address in its entirety. (This will take a few minutes; it’s long!) Discuss the significance of this letter (ie. it broke the centuries long tradition of royalty, making the president of the United States an elected official, rather than a king or queen.) At present, one branch of Congress reads the address out loud on Washington’s Birthday.  Research to discover which branch continues this tradition.

5 Facts about the U.S Constitution is taken from excerpts of The Mystery of History Volume IV. For more information and a free audio sample click here.